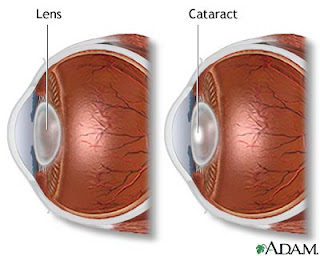 “Cataracts” are an especially common eye abnormality
that occurs mainly in older people.A cataract is a cloudy
or opaque area in the lens. In the early stage of
cataract formation, the proteins in some of the lens
fibers become denatured. Later, these same proteins
coagulate to form opaque areas in place of the normal
transparent protein fibers.
When a cataract has obscured light transmission so
greatly that it seriously impairs vision, the condition can
be corrected by surgical removal of the lens.When this
is done, the eye loses a large portion of its refractive
power, which must be replaced by a powerful convex
lens in front of the eye; usually, however, an artificial
plastic lens is implanted in the eye in place of the
removed lens.

A cataract is a cloudy or opaque area in the lens of the eye. Cataracts usually develop as a person gets older and may run in families. Other environmental factors such as smoking or exposure to toxic substances can also accelerate the development of a cataract. Cataracts can cause visual problems such as difficulty seeing at night, seeing halos around lights, and sensitivity to glare.
at December 04, 2009
Email ThisBlogThis!Share to TwitterShare to FacebookShare to Pinterest
Labels: Ophthalmology