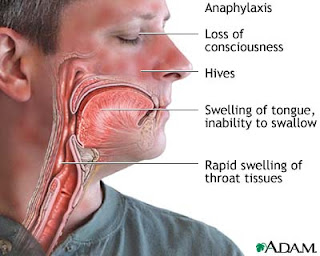 When a specific allergen is injected
directly into the circulation, the allergen can react with
basophils of the blood and mast cells in the tissues
located immediately outside the small blood vessels
if the basophils and mast cells have been sensitized
by attachment of IgE reagins.Therefore, a widespread
allergic reaction occurs throughout the vascular
system and closely associated tissues. This is called
anaphylaxis. Histamine is released into the circulation
and causes body-wide vasodilation as well as increased
permeability of the capillaries with resultant marked
loss of plasma from the circulation. An occasional
person who experiences this reaction dies of circulatory
shock within a few minutes unless treated with
epinephrine to oppose the effects of the histamine.
Also released from the activated basophils and mast
cells is a mixture of leukotrienes called slow-reacting
substance of anaphylaxis.These leukotrienes can cause
spasm of the smooth muscle of the bronchioles, eliciting
an asthma-like attack, sometimes causing death by
suffocation.
Urticaria. Urticaria results from antigen entering specific
skin areas and causing localized anaphylactoid
reactions. Histamine released locally causes (1) vasodilation
that induces an immediate red flare and (2)
increased local permeability of the capillaries that
leads to local circumscribed areas of swelling of the
skin within another few minutes. The swellings are
commonly called hives. Administration of antihistamine
drugs to a person before exposure will prevent
the hives.
Hay Fever. In hay fever, the allergen-reagin reaction
occurs in the nose. Histamine released in response to
the reaction causes local intranasal vascular dilation,
with resultant increased capillary pressure as well as
increased capillary permeability. Both these effects
cause rapid fluid leakage into the nasal cavities and
into associated deeper tissues of the nose; and the
nasal linings become swollen and secretory. Here
again, use of antihistamine drugs can prevent this
swelling reaction. But other products of the allergenreagin
reaction can still cause irritation of the nose,
eliciting the typical sneezing syndrome.
Asthma. Asthma often occurs in the “allergic” type of
person. In such a person, the allergen-reagin reaction
occurs in the bronchioles of the lungs. Here, an important
product released from the mast cells is believed
to be the slow-reacting substance of anaphylaxis, which
causes spasm of the bronchiolar smooth muscle. Consequently,
the person has difficulty breathing until the
reactive products of the allergic reaction have been
removed. Administration of antihistaminics has less
effect on the course of asthma because histamine does
not appear to be the major factor eliciting the asthmatic
reaction.
at December 11, 2009
Email ThisBlogThis!Share to TwitterShare to FacebookShare to Pinterest
Labels: Pathology