Abnormalities of Secretion by the Ovaries 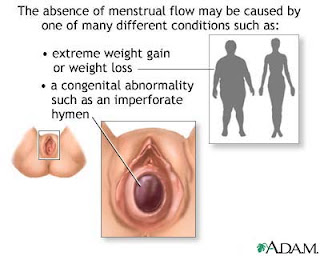 Amenorrhea is the lack of menstrual flow and can be a normal occurrence or a sign of malfunction or disease. In primary amenorrhea, menstruation does not begin when expected (by the age of 16). Secondary amenorrhea occurs when the normal established menstrual cycle is shut down for 6 or more months due to a condition other than pregnancy, breastfeeding or menopause.

Abnormalities of Secretion by the Ovaries

Hypogonadism. Less than normal secretion by the ovaries can result from poorly formed ovaries, lack of ovaries,
or genetically abnormal ovaries that secrete the wrong hormones because of missing enzymes in the secretory
cells. When ovaries are absent from birth or when they become nonfunctional before puberty, female
eunuchism occurs. In this condition, the usual secondary sexual characteristics do not appear, and the sexual
organs remain infantile. Especially characteristic of this condition is prolonged growth of the long bones
because the epiphyses do not unite with the shafts as early as they do in a normal woman. Consequently, the
female eunuch is essentially as tall as or perhaps even slightly taller than her male counterpart of similar
genetic background.
When the ovaries of a fully developed woman are removed, the sexual organs regress to some extent so
that the uterus becomes almost infantile in size, the vagina becomes smaller, and the vaginal epithelium
becomes thin and easily damaged. The breasts atrophy and become pendulous, and the pubic hair becomes
thinner. The same changes occur in women after menopause.

Irregularity of Menses, and Amenorrhea Caused by Hypogonadism.

As pointed out in the preceding discussion of menopause, the quantity of estrogens produced
by the ovaries must rise above a critical value in order to cause rhythmical sexual cycles. Consequently,
in hypogonadism or when the gonads are secreting small quantities of estrogens as a result of other factors,
such as hypothyroidism, the ovarian cycle often does not occur normally. Instead, several months may elapse
between menstrual periods, or menstruation may cease altogether (amenorrhea). Prolonged ovarian cycles are
frequently associated with failure of ovulation, presumably because of insufficient secretion of LH at the time
of the preovulatory surge of LH, which is necessary for ovulation.

Hypersecretion by the Ovaries.

Extreme hypersecretion of ovarian hormones by the ovaries is a rare clinical entity,
because excessive secretion of estrogens automatically decreases the production of gonadotropins by the
pituitary, and this limits the production of ovarian hormones. Consequently, hypersecretion of feminizing
hormones is usually recognized clinically only when a feminizing tumor develops. A rare granulosa cell tumor can develop in an ovary, occurring more often after menopause than before.
These tumors secrete large quantities of estrogens, which exert the usual estrogenic effects, including
hypertrophy of the uterine endometrium and irregular bleeding from this endometrium. In fact, bleeding is
often the first and only indication that such a tumor exists.
at December 29, 2009
Email ThisBlogThis!Share to TwitterShare to FacebookShare to Pinterest
Labels: OBG