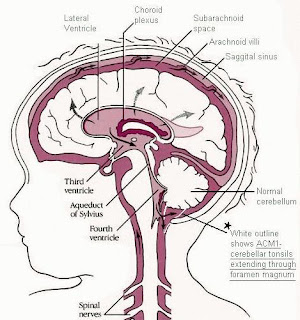 Cerebrospinal fluid (CSF), Liquor cerebrospinalis, is a clear bodily fluid that occupies the subarachnoid space and the ventricular system around and inside the brain. In essence, the brain "floats" in it.
The CSF occupies the space between the arachnoid mater (the middle layer of the brain cover, meninges), and the pia mater (the layer of the meninges closest to the brain). It constitutes the content of all intra-cerebral (inside the brain, cerebrum) ventricles, cisterns, and sulci (singular sulcus), as well as the central canal of the spinal cord.
It acts as a "cushion" or buffer for the cortex, providing a basic mechanical and immunological protection to the brain inside the skull.
It is produced in the choroid plexus.
It is produced in the brain by modified ependymal cells in the choroid plexus (approx. 50-70%), and the remainder is formed around blood vessels and along ventricular walls. It circulates from the choroid plexus through the interventricular foramina (foramen of Monro) into the third ventricle, and then through the cerebral aqueduct (aqueduct of Sylvius) into the fourth ventricle, where it exits through two lateral apertures (foramina of Luschka) and one median aperture (foramen of Magendie). It then flows through the cerebellomedullary cistern down the spinal cord and over the cerebral hemispheres.
It had been thought that CSF returns to the vascular system by entering the dural venous sinuses via the arachnoid granulations or villi. However, some[1] have suggested that CSF flow along the cranial nerves and spinal nerve roots allow it into the lymphatic channels; this flow may play a substantial role in CSF reabsorbtion, in particular in the neonate, in which arachnoid granulations are sparsely distributed. The flow of CSF to the nasal submucosal lymphatic channels through the cribiform plaque seems to be specially important.

Functions:
CSF has many putative roles, including mechanical protection of the brain, distribution of neuroendocrine factors, and prevention of brain ischemia. The actual mass of the human brain is about 1400 grams; however the net weight of the brain suspended in the CSF is equivalent to a mass of 25 grams.[5] The prevention of brain ischemia is made by decreasing the amount of CSF in the limited space inside the skull. This decreases total intracranial pressure and facilitates blood perfusion. It also cushions the spinal cord against jarring shock.
at November 10, 2009
Email ThisBlogThis!Share to TwitterShare to FacebookShare to Pinterest
Labels: Neurology