Cerebellum and Its Motor Functions 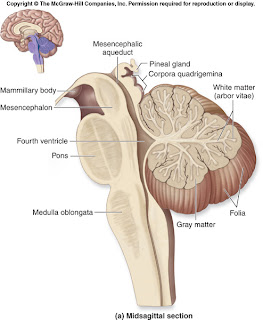 The cerebellum, has long been called a silent area of the brain, principally because electrical excitation of the cerebellum does not cause any conscious sensation and rarely causes any motor movement. Removal of the cerebellum, however, does cause body movements to
become highly abnormal. The cerebellum is especially vital during rapid muscular
activities such as running, typing, playing the piano, and even talking. Loss
of this area of the brain can cause almost total incoordination of these activities
even though its loss causes paralysis of no muscles.
But how is it that the cerebellum can be so important when it has no direct
ability to cause muscle contraction? The answer is that it helps to sequence
the motor activities and also monitors and makes corrective adjustments in the
body’s motor activities while they are being executed so that they will conform to
the motor signals directed by the cerebral motor cortex and other parts of the
brain.
The cerebellum receives continuously updated information about the desired
sequence of muscle contractions from the brain motor control areas; it also
receives continuous sensory information from the peripheral parts of the body,
giving sequential changes in the status of each part of the body—its position,
rate of movement, forces acting on it, and so forth. The cerebellum then compares
the actual movements as depicted by the peripheral sensory feedback
information with the movements intended by the motor system. If the two do
not compare favorably, then instantaneous subconscious corrective signals are
transmitted back into the motor system to increase or decrease the levels of
activation of specific muscles.
The cerebellum also aids the cerebral cortex in planning the next sequential
movement a fraction of a second in advance while the current movement is still
being executed, thus helping the person to progress smoothly from one movement to the next. Also, it learns by its mistakes—that is, if a movement does not occur exactly as intended, the cerebellar circuit learns to make a stronger or weaker movement the next time. To do this, changes occur in the excitability of appropriate cerebellar neurons, thus bringing subsequent
muscle contractions into better correspondence with the intended movements.
at November 24, 2009
Email ThisBlogThis!Share to TwitterShare to FacebookShare to Pinterest
Labels: Neurology