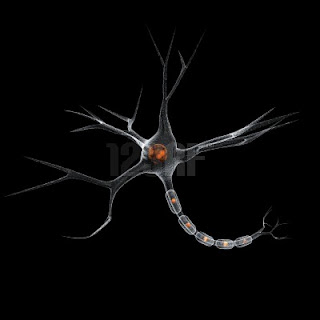 Every medical student is aware that information is transmitted in the central nervous system mainly in the form of nerve action potentials, called simply “nerve impulses,” through a succession of neurons, one after another. However, in addition, each impulse (1) may be blocked in its transmission from one neuron to the next, (2) may be changed from a single impulse into repetitive impulses, or (3) may be integrated with impulses from other neurons to cause highly intricate patterns of impulses in successive neurons. All these functions can be classified as synaptic functions of neurons.
Types of Synapses—Chemical and Electrical
There are two major types of synapses: (1) the chemical synapse and (2) the electrical synapse.
Almost all the synapses used for signal transmission in the central nervous system of the human being are chemical synapses. In these, the first neuron secretes at its nerve ending synapse a chemical substance called a neurotransmitter (or often called simply transmitter substance), and this transmitter in turn acts on receptor proteins in the membrane of the next neuron to excite the neuron, inhibit it, or modify its sensitivity in some other way. More than 40 important transmitter substances have been discovered thus far. Some of the best known are acetylcholine, norepinephrine, epinephrine, histamine, gamma-aminobutyric acid (GABA), glycine, serotonin, and glutamate. Electrical synapses, in contrast, are characterized by direct open fluid channels that conduct electricity from one cell to the next. Most of these consist of small protein tubular structures called gap junctions that allow free movement of ions from the interior of one cell to the interior of the next. Such junctions . Only a few examples of gap junctions have been found in the central nervous system. However, it is by way of gap junctions and other similar junctions that action potentials are transmitted from one smooth muscle fiber to the next in visceral
smooth muscle and from one cardiac muscle cell to the next in cardiac muscle......

at November 01, 2009
Email ThisBlogThis!Share to TwitterShare to FacebookShare to Pinterest
Labels: Neurology