Schizophrenia—Possible Exaggerated Function of Part of the Dopamine System 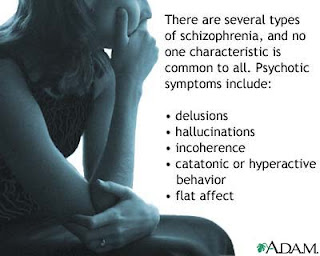 Schizophrenia comes in many varieties. One of the most common types is seen in the person who hears voices and has delusions of grandeur, intense fear, or other types of feelings that are unreal. Many schizophrenics
(1) are highly paranoid, with a sense of persecution from outside sources; (2) may develop incoherent speech, dissociation of ideas, and abnormal sequences of thought; and (3) are often withdrawn, sometimes with abnormal posture and even rigidity.

There are reasons to believe that schizophrenia results from one or more of three possibilities: (1) multiple areas in the cerebral cortex prefrontal lobes in which neural signals have become blocked or where processing of the signals becomes dysfunctional because many synapses normally excited by the neurotransmitter glutamate lose their responsiveness to this transmitter; (2) excessive excitement of a group of neurons that secrete dopamine in the behavioral centers of the brain, including in the frontal lobes; and/or (3) abnormal function
of a crucial part of the brain’s limbic behavioral control system centered around the hippocampus. The reason for believing that the prefrontal lobes are involved in schizophrenia is that a schizophrenic-like pattern of mental activity can be induced in monkeys by making multiple minute lesions in widespread areas of the prefrontal lobes. Dopamine has been implicated as a possible cause of schizophrenia because many patients with Parkinson’s disease develop schizophrenic-like symptoms when they are treated with the drug called L-dopa. This drug releases dopamine in the brain, which is advantageous for treating Parkinson’s disease, but at the same time it depresses various portions of the prefrontal lobes and other related areas. It has been suggested that in schizophrenia excess dopamine is secreted by a group of dopamine-secreting neurons whose cell bodies lie in the ventral tegmentum of the mesencephalon, medial and superior to the substantia nigra. These neurons give rise to the so-called mesolimbic dopaminergic system that projects nerve fibers and dopamine secretion into the medial and anterior portions of the limbic system, especially into the hippocampus, amygdala, anterior caudate nucleus, and portions of the prefrontal lobes. All of these are powerful behavioral control centers. An even more compelling reason for believing that schizophrenia might be caused by excess production of dopamine is that many drugs that are effective in treating schizophrenia—such as chlorpromazine, haloperidol, and thiothixene—-all either decrease secretion of
dopamine at dopaminergic nerve endings or decrease the effect of dopamine on subsequent neurons. Finally, possible involvement of the hippocampus in schizophrenia was discovered recently when it was learned that in schizophrenia, the hippocampus is often reduced in size, especially in the dominant hemisphere.
at October 23, 2009
Email ThisBlogThis!Share to TwitterShare to FacebookShare to Pinterest
Labels: Neurology