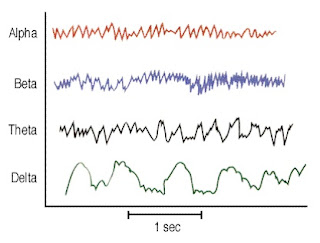 Electrical recordings from the surface of the brain or even from the outer surface of the head demonstrate that there is continuous electrical activity in the brain.
Both the intensity and the patterns of this electrical activity are determined by the level of excitation of different parts of the brain resulting from sleep, wakefulness, or brain diseases such as epilepsy or even psychoses. The undulations in the recorded electrical potentials, are called brain waves, and the entire record is called an EEG (electroencephalogram).


The intensities of brain waves recorded from the surface of the scalp range from 0 to 200 microvolts, and their frequencies range from once every few seconds to 50 or more per second. The character of the waves is dependent on the degree of activity in respective parts of the cerebral cortex, and the waves change markedly between the states of wakefulness and sleep and coma. Much of the time, the brain waves are irregular, and no specific pattern can be discerned in the EEG. At other times, distinct patterns do appear, some of which are characteristic of specific abnormalities of the brain such as epilepsy,

In normal healthy people, most waves in the EEG can be classified as alpha, beta, theta, and delta waves, which are

Alpha waves are rhythmical waves that occur at frequencies between 8 and 13 cycles per second and are found in the EEGs of almost all normal adult people when they are awake and in a quiet, resting state of cerebration.These waves occur most intensely in the occipital
region but can also be recorded from the parietal and frontal regions of the scalp. Their voltage usually is about 50 microvolts. During deep sleep, the alpha waves disappear. When the awake person’s attention is directed to some specific type of mental activity, the alpha waves
are replaced by asynchronous, higher-frequency but lower-voltage beta waves.visual sensations

Beta waves occur at frequencies greater than 14 cycles per second and as high as 80 cycles per second.They are recorded mainly from the parietal and frontal regions during specific activation of these parts of the brain.

Theta waves have frequencies between 4 and 7 cycles per second. They occur normally in the parietal and temporal regions in children, but they also occur during emotional stress in some adults, particularly during disappointment and frustration. Theta waves also occur in
many brain disorders, often in degenerative brain states.

Delta waves include all the waves of the EEG with frequencies less than 3.5 cycles per second, and they often have voltages two to four times greater than most other types of brain waves. They occur in very deep sleep, in infancy, and in serious organic brain disease. They also occur in the cortex of animals that have had subcortical transections separating the cerebral cortex
from the thalamus. Therefore, delta waves can occur strictly in the cortex independent of activities in lower regions of the brain.
at October 17, 2009
Email ThisBlogThis!Share to TwitterShare to FacebookShare to Pinterest
Labels: Neurology