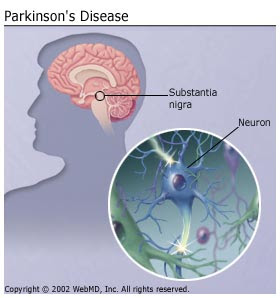 (also known as Parkinson disease or PD) is a degenerative disorder of the central nervous system that often impairs the sufferer's motor skills, speech, and other functions.
Parkinson's disease belongs to a group of conditions called movement disorders. It is characterized by muscle rigidity, tremor, a slowing of physical movement (bradykinesia) and, in extreme cases, a loss of physical movement (akinesia). The primary symptoms are the results of decreased stimulation of the motor cortex by the basal ganglia, normally caused by the insufficient formation and action of dopamine, which is produced in the dopaminergic neurons of the brain. Secondary symptoms may include high level cognitive dysfunction and subtle language problems. PD is both chronic and progressive.
PD is the most common cause of chronic progressive parkinsonism, a term which refers to the syndrome of tremor, rigidity, bradykinesia and postural instability. PD is also called "primary parkinsonism" or "idiopathic PD" (classically meaning having no known cause although this term is not strictly true in light of the plethora of newly discovered genetic mutations). While many forms of parkinsonism are "idiopathic", "secondary" cases may result from toxicity most notably of drugs, head trauma, or other medical disorders. The disease is named after English physician James Parkinson, who made a detailed description of the disease in his essay: "An Essay on the Shaking Palsy

Parkinson's Disease affects movement (motor symptoms). Other typical symptoms include disorders of mood, behaviour, thinking, and sensation (non-motor symptoms). Patients' individual symptoms may be quite dissimilar and progression of the disease is also distinctly individual

The cardinal symptoms are: 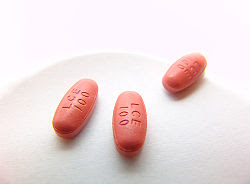 Stalevo for treatment of Parkinson's disease
The most widely used form of treatment is L-dopa in various forms. L-dopa is transformed into dopamine in the dopaminergic neurons by L-aromatic amino acid decarboxylase (often known by its former name dopa-decarboxylase). However, only 1-5% of L-DOPA enters the dopaminergic neurons. The remaining L-DOPA is often metabolised to dopamine elsewhere, causing a wide variety of side effects. Due to feedback inhibition, L-dopa results in a reduction in the endogenous formation of L-dopa, and so eventually becomes counterproductive.
Carbidopa and benserazide are dopa decarboxylase inhibitors. They help to prevent the metabolism of L-dopa before it reaches the dopaminergic neurons and are generally given as combination preparations of carbidopa/levodopa (co-careldopa) (e.g. Sinemet, Parcopa) and benserazide/levodopa (co-beneldopa) (e.g. Madopar). There are also controlled release versions of Sinemet and Madopar that spread out the effect of the L-dopa. Duodopa is a combination of levodopa and carbidopa, dispersed as a viscous gel. Using a patient-operated portable pump, the drug is continuously delivered via a tube directly into the upper small intestine, where it is rapidly absorbed. There is also Stalevo (Carbidopa, Levodopa and Entacapone).
Tolcapone inhibits the COMT enzyme, thereby prolonging the effects of L-dopa, and so has been used to complement L-dopa. However, due to its possible side effects such as liver failure, it's limited in its availability. A similar drug, entacapone has not been shown to cause significant alterations of liver function and maintains adequate inhibition of COMT over time.[35]

The dopamine agonists bromocriptine, pergolide, pramipexole, ropinirole , piribedil, cabergoline, apomorphine, and lisuride are moderately effective. These have their own side effects including those listed above in addition to somnolence, hallucinations and/or insomnia. Several forms of dopamine agonism have been linked with a markedly increased risk of problem gambling. Dopamine agonists initially act by stimulating some of the dopamine receptors. However, they cause the dopamine receptors to become progressively less sensitive, thereby eventually increasing the symptoms.
Dopamine agonists can be useful for patients experiencing on-off fluctuations and dyskinesias as a result of high doses of L-dopa. Apomorphine can be administered via subcutaneous injection using a small pump which is carried by the patient. A low dose is automatically administered throughout the day, reducing the fluctuations of motor symptoms by providing a steady dose of dopaminergic stimulation. After an initial "apomorphine challenge" in hospital to test its effectiveness and brief patient and primary caregiver (often a spouse or partner), the latter of whom takes over maintenance of the pump. The injection site must be changed daily and rotated around the body to avoid the formation of nodules. Apomorphine is also available in a more acute dose as an autoinjector pen for emergency doses such as after a fall or first thing in the morning. Nausea and vomiting are common, and may require domperidone (an antiemetic).