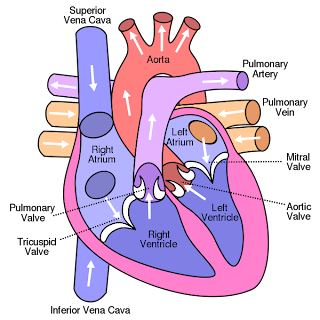 The human heart has four chambers: two thin-walled atria on top, which receive blood, and two thick-walled ventricles underneath, which pump blood. Veins carry blood into the atria and arteries carry blood away from the ventricles. Between the atria and the ventricles are atrioventricular valves, which prevent back-flow of blood from the ventricles to the atria. The left valve has two flaps and is called the bicuspid (or mitral) valve, while the right valve has 3 flaps and is called the tricuspid valve. The valves are held in place by valve tendons (“heart strings”) attached to papillary muscles, which contract at the same time as the ventricles, holding the vales closed. There are also two semi-lunar valves in the arteries (the only examples of valves in arteries) called the pulmonary and aortic valves.
The left and right halves of the heart are separated by the inter-ventricular septum. The walls of the right ventricle are 3 times thinner than on the left and it produces less force and pressure in the blood. This is partly because the blood has less far to go (the lungs are right next to the heart), but also because a lower pressure in the pulmonary circulation means that less fluid passes from the capillaries to the alveoli.

The heart is made of cardiac muscle, composed of cells called myocytes. When myocytes receive an electrical impulse they contract together, causing a heartbeat. Since myocytes are constantly active, they have a great requirement for oxygen, so are fed by numerous capillaries from two coronary arteries. These arise from the aorta as it leaves the heart. Blood returns via the coronary sinus, which drains directly into the right atrium.
The Cardiac Cycle
When the cardiac muscle contracts the volume in the chamber decrease, so the pressure in the chamber increases, so the blood is forced out. Cardiac muscle contracts about 75 times per minute, pumping around 75 cm³ of blood from each ventricle each beat (the stroke volume). It does this continuously for up to 100 years. There is a complicated sequence of events at each heartbeat called the cardiac cycle.
Cardiac muscle is myogenic, which means that it can contract on its own, without needing nerve impulses. Contractions are initiated within the heart by the sino-atrial node (SAN, or pacemaker) in the right atrium. This extraordinary tissue acts as a clock, and contracts spontaneously and rhythmically about once a second, even when surgically removed from the heart.

The cardiac cycle has three stages:
1. Atrial Systole (pronounced sis-toe-lay). The SAN contracts and transmits electrical impulses throughout the atria, which both contract, pumping blood into the ventricles. The ventricles are electrically insulated from the atria, so they do not contract at this time.
2. Ventricular Systole. The electrical impulse passes to the ventricles via the atrioventricular node (AVN), the bundle of His and the Purkinje fibres. These are specialised fibres that do not contract but pass the electrical impulse to the base of the ventricles, with a short but important delay of about 0.1s. The ventricles therefore contract shortly after the atria, from the bottom up, squeezing blood upwards into the arteries. The blood can't go into the atria because of the atrioventricular valves, which are forced shut with a loud "lub".
3. Diastole. The atria and the ventricles relax, while the atria fill with blood. The semilunar valves in the arteries close as the arterial blood pushes against them, making a "dup" sound.
The events of the three stages are shown in the diagram on the next page. The pressure changes show most clearly what is happening in each chamber. Blood flows because of pressure differences, and it always flows from a high pressure to a low pressure, if it can. So during atrial systole the atria contract, making the atrium pressure higher than the ventricle pressure, so blood flows from the atrium to the ventricle. The artery pressure is higher still, but blood can’t flow from the artery back into the heart due to the semi-lunar valves. The valves are largely passive: they open when blood flows through them the right way and close when blood tries to flow through them the wrong way.


The PCG (or phonocardiogram) is a recording of the sounds the heart makes. The cardiac muscle itself is silent and the sounds are made by the valves closing. The first sound (lub) is the atrioventricular valves closing and the second (dub) is the semi-lunar valves closing.
The ECG (or electrocardiogram) is a recording of the electrical activity of the heart. There are characteristic waves of electrical activity marking each phase of the cardiac cycle. Changes in these ECG waves can be used to help diagnose problems with the heart.


Exercise and Heart Rate
The rate at which the heart beats and the volume of blood pumped at each beat (the stroke volume) can both be controlled. The product of these two is called the cardiac output – the amount of blood flowing in a given time:

How does the cardiovascular centre respond to exercise?
When the muscles are active they respire more quickly and cause several changes to the blood, such as decreased oxygen concentration, increased carbon dioxide concentration, decreased pH (since the carbon dioxide dissolves to form carbonic acid) and increased temperature. All of these changes are detected by various receptor cells around the body, but the pH changes are the most sensitive and therefore the most important. The main chemoreceptors (receptor cells that can detect chemical changes) are found in:
· The walls of the aorta (the aortic body), monitoring the blood as it leaves the heart
· The walls of the carotid arteries (the carotid bodies), monitoring the blood to the head and brain
· The medulla, monitoring the tissue fluid in the brain
The chemoreceptors send nerve impulses to the cardiovascular centre indicating that more respiration is taking place, and the cardiovascular centre responds by increasing the heart rate.

A similar job is performed by temperature receptors and stretch receptors in the muscles, which also detect increased muscle activity.
Exercise affects the rest of the circulation as well as increasing cardiac output. When there is an increase in exercise, the muscles respire faster, and therefore need a greater oxygen supply. This can be achieved by increasing the amount of blood flowing through the capillaries at the muscles. A large increase in blood flowing to one part of the body must be met by a reduction in the amount of blood supplying other parts of the body, such as the digestive system. Some organs need a stable blood supply (to supply enough oxygen and glucose for respiration), to work efficiently what ever the body is doing. The three main organs that require a constant blood supply are:
· The heart needs a constant blood supply otherwise the heart muscle would starve of oxygen and glucose, making it unable to pump more blood, and might cause a heart attack.
· The brain needs a constant blood supply otherwise the brain would reduce ability to react to danger and might result in unconsciousness/death.
· The kidneys need a constant blood supply otherwise there would be a build-up of toxins in the blood.

Exercise and Breathing
Both the rate and depth (volume) of breathing can be varied. The product of these two is called the ventilation rate – the volume air ventilating the lungs each minute:

How does respiratory centre respond to exercise?
The process is the same as for heart rate, with the chemoreceptors in the aortic and carotid bodies detecting an increase in respiration.

Again, the stretch receptors in the muscles give a more rapid indication of muscular activity, allowing an anticipatory increase in breathing rate even before the carbon dioxide concentration the blood has changed.
at September 29, 2009
Email ThisBlogThis!Share to TwitterShare to FacebookShare to Pinterest
Labels: Physiology