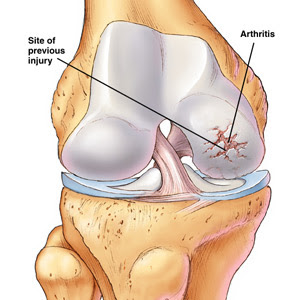 Arthritis is a joint disorder featuring inflammation. A joint is an area of the body where two different bones meet. A joint functions to move the body parts connected by its bones. Arthritis literally means inflammation of one or more joints.

Arthritis is frequently accompanied by joint pain. Joint pain is referred to as arthralgia.

The causes of arthritis depend on the form of arthritis. Causes include injury (leading to osteoarthritis), metabolic abnormalities (such as gout and pseudogout), hereditary factors, infections, and unclear reasons (such as rheumatoid arthritis and systemic lupus erythematosus).

Arthritis is classified as one of the rheumatic diseases. These are conditions that are different individual illnesses, with differing features, treatments, complications, and prognoses. They are similar in that they have a tendency to affect the joints, muscles, ligaments, cartilage, and tendons, and many have the potential to affect other internal body areas.

Symptoms of arthritis include pain and limited function of joints. Inflammation of the joints from arthritis is characterized by joint stiffness, swelling, redness, and warmth. Tenderness of the inflamed joint can be present.

Many of the forms of arthritis, because they are rheumatic diseases, can cause symptoms affecting various organs of the body that do not directly involve the joints. Therefore, symptoms in some patients with certain forms of arthritis can also include fever, gland swelling (lymph node), weight loss, fatigue, feeling unwell, and even symptoms from abnormalities of organs such as the lungs, heart, or kidneys.


Who is affected by arthritis?

Arthritis sufferers include men and women, children and adults. Approximately 350 million people worldwide have arthritis. Nearly 40 million people in the United States are affected by arthritis, including over a quarter million children!
More than 27 million Americans have osteoarthritis. Approximately 1.3 million Americans suffer from rheumatoid arthritis.
More than half of those with arthritis are under 65 years of age. Nearly 60% of Americans with arthritis are women.