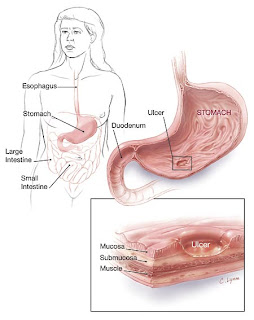 A peptic ulcer also known as ulcus pepticum, PUD or peptic ulcer disease,[1] is an ulcer (defined as mucosal erosions equal to or greater than 0.5 cm) of an area of the gastrointestinal tract that is usually acidic and thus extremely painful. As many as 80% of ulcers are associated with Helicobacter pylori, a spiral-shaped bacterium that lives in the acidic environment of the stomach, however only 20% of those cases go to a doctor. Ulcers can also be caused or worsened by drugs such as aspirin and other NSAIDs.
Contrary to general belief, more peptic ulcers arise in the duodenum (first part of the small intestine, just after the stomach) than in the stomach. About 4% of stomach ulcers are caused by a malignant tumor, so multiple biopsies are needed to exclude cancer. Duodenal ulcers are generally benign.

Signs and symptoms
Symptoms of a peptic ulcer can be
abdominal pain, classically epigastric with severity relating to mealtimes, after around 3 hours of taking a meal (duodenal ulcers are classically relieved by food, while gastric ulcers are exacerbated by it);
bloating and abdominal fullness;
waterbrash (rush of saliva after an episode of regurgitation to dilute the acid in esophagus);
nausea, and copious vomiting;
loss of appetite and weight loss;
hematemesis (vomiting of blood); this can occur due to bleeding directly from a gastric ulcer, or from damage to the esophagus from severe/continuing vomiting.
melena (tarry, foul-smelling feces due to oxidized iron from hemoglobin);
rarely, an ulcer can lead to a gastric or duodenal perforation. This is extremely painful and requires immediate surgery.
A history of heartburn, gastroesophageal reflux disease (GERD) and use of certain forms of medication can raise the suspicion for peptic ulcer. Medicines associated with peptic ulcer include NSAID (non-steroid anti-inflammatory drugs) that inhibit cyclooxygenase, and most glucocorticoids(e.g. dexamethasone and prednisolone).
In patients over 45 with more than two weeks of the above symptoms, the odds for peptic ulceration are high enough to warrant rapid investigation by EGD (see below).
The timing of the symptoms in relation to the meal may differentiate between gastric and duodenal ulcers: A gastric ulcer would give epigastric pain during the meal, as gastric acid is secreted, or afterthe meal, as the alkaline duodenal contents reflux into the stomach. Symptoms of duodenal ulcers would manifest mostly before the meal—when acid (production stimulated by hunger) is passed into the duodenum. However, this is not a reliable sign in clinical practice.