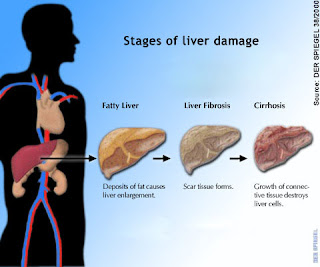 it has a wide range of functions..
1.Metbolism
2.Glycogen storage
3.Decomposition of RBC's
4.Production of bile for fats digestion , absorption and emulsification of lipids.
5.Biochemical reactions.
6.Cholesterol formation.
7.Stores a multitude of
substances.
8.Reticuloendothelial system.
9.Produces Plasma proteins(albumins) and clotting factors and synthesizes angiotensiongen.
10.Breakdown of hemoglobin, creating metabolites that are added to bile as pigment (bilirubin and biliverdin).

Liver disease (also called hepatic disease) is a broad term describing any single number of diseases affecting the liver. Many are accompanied by jaundice caused by increased levels of bilirubin in the system. The bilirubin results from the breakup of the hemoglobin of dead red blood cells; normally, the liver removes bilirubin from the blood and excretes it through bile.


Hepatitis
(plural hepatitides) implies injury to the liver characterized by the presence of inflammatory cells in the tissue of the organ. The name is from ancient Greek hepar (ἧπαρ), the root being hepat- (ἡπατ-), meaning liver, and suffix -itis, meaning "inflammation" . ]. The condition can be self-limiting, healing on its own, or can progress to scarring of the liver. Hepatitis is acute when it lasts less than six months and chronic when it persists longer. A group of viruses known as the hepatitis viruses cause most cases of liver damage worldwide. Hepatitis can also be due to toxins (notably alcohol), other infections or from autoimmune process. It may run a subclinical course when the affected person may not feel ill. The patient becomes unwell and symptomatic when the disease impairs liver functions that include, among other things, removal of harmful substances, regulation of blood composition, and production of bile to help digestion.

Most cases of acute hepatitis are due to viral infections:

Other viral infections can cause hepatitis (inflammation of the liver):

A large number of drugs can cause hepatitis: