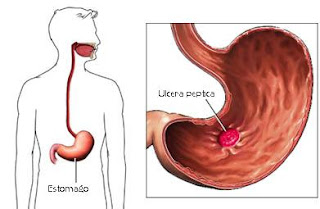 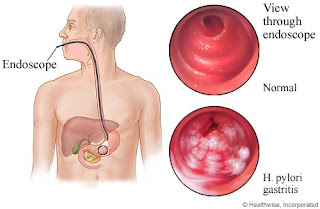 Gastritis is not a single disease, but several different conditions that all have inflammation of the stomach lining. Gastritis can be caused by drinking too much alcohol, prolonged use of nonsteroidal anti-inflammatory drugs (NSAIDs) such as aspirin or ibuprofen, or infection with bacteria such as Helicobacter pylori (H. pylori). Sometimes gastritis develops after major surgery, traumatic injury, burns, or severe infections. Certain diseases, such as pernicious anemia, autoimmune disorders, and chronic bile reflux, can cause gastritis as well.

The most common symptoms are abdominal upset or pain. Other symptoms are belching, abdominal bloating, nausea, and vomiting or a feeling of fullness or of burning in the upper abdomen. Blood in your vomit or black stools may be a sign of bleeding in the stomach, which may indicate a serious problem requiring immediate medical attention.

Gastritis is diagnosed through one or more medical tests:

•Upper gastrointestinal endoscopy. The doctor eases an endoscope, a thin tube containing a tiny camera, through your mouth (or occasionally nose) and down into your stomach to look at the stomach lining. The doctor will check for inflammation and may remove a tiny sample of tissue for tests. This procedure to remove a tissue sample is called a biopsy.


•Blood test. The doctor may check your red blood cell count to see whether you have anemia, which means that you do not have enough red blood cells. Anemia can be caused by bleeding from the stomach.

If your gastritis is caused by an infection, that problem may be treated as well. For example, the doctor might prescribe antibiotics to clear up H. pylori infection. Once the underlying problem disappears, the gastritis usually does too. Talk to your doctor before stopping any medicine or starting any gastritis treatment on your own.