Abnormal Digestion of food in the Small intestine--Pancreatic Failure 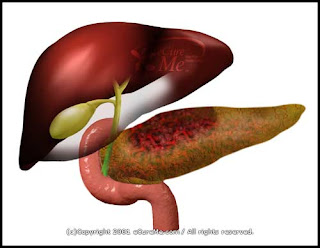 A serious cause of abnormal digestion is failure of the pancreas to secretes pancreatic juice into the small intestine.Lack of pancreatic secretion frequently occurs


(3)after the head of pancreas has been removed because of malignancy.

Loss of pancreatic juice means loss of trypsin,chymotrypsin, carboxypolypeptidase, pancreatic amylase, pancreatic lipase, and still a few other digestive enzymes.Without these enzymes,as much as 60% of the fat entering the small intestine may be unabsorbed, as well as one third to one half of the proteins and carbohydrates.As a result, large portions of the ingested food cannot be used for nutrition, and copious fatty feces are excreted.
Pancreatitis
means inflammation of the pancreas, and this can occur in the form of either acute pancreatitis or chronic pancreatitis.
The most common cause of pancreatitis is drinking excess alcohol, and the second most common cause is blockage of the papilla of Vater by a gallstone; the two together account for more than 90% of all cases.When a gallstone blocks the papilla of Vater, this blocks the main secretory duct from the pancreas as well as common bile duct. The pancreatic enzymes are then dummed up in the ducts and acini of the pancreas. Eventually, so much trypsinogen accumulates that it overcomes the trypsin inhibitor in the secretion, and a small quantity of trypsinogen becomes activated to form trypsin. Once this happens, the trypsin activates still more trypsinogen as well as chymotrypsinogen and carboxypolypeptidase, resulting in a vicious circle until most of the proteolytic enzymes in the pancreatic ducts and acini become activated. These enzymes rapidly digest large portion of the pancreas itself, sometimes completely and permanently destroying the ability of the pancreas to secrete digestive enzymes.


at August 27, 2009
Email ThisBlogThis!Share to TwitterShare to FacebookShare to Pinterest
Labels: Biochemistry